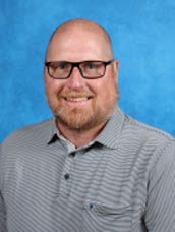 Erik Rechtorovic was born and raised in Montgomery, NY and graduated from Valley Central High School in 1990. He attended Bridgewater College in Bridgewater, VA where he played basketball for the Eagles. He graduated with a Bachelor of Science in Health and Physical Education in 1994. In 2005, he graduated with his Masters in Educational Leadership from Troy State University.

He began his teaching career in 1995 at Central High School in Brooksville, FL. He moved to Thomaston in 1997 where he began teaching and coaching at Upson-Lee. He has worked in the Thomaston-Upson School System for 14 of his 22 years in education. He is beginning his 23rd year in education and serving his 3rd year as Assistant Principal at Upson-Lee Middle School.

He and his wife Hayley, who is an Instructional Coach at Upson-Lee Primary School, have been married for 19 years. They have 2 children: Ty (16), a Junior at Upson-Lee High School and Elyn (12), a 7th grader at Upson-Lee Middle School.