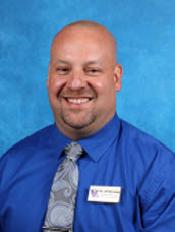 Mr. Jeff Wheeless was born and raised in Thomaston Georgia. He graduated from Upson-Lee High School in 1999. He attended Valdosta State University before returning home and earning an Electronics Technician Degree from Flint River College and joining the workforce at Robins Airforce Base. After spending 5 years as an electronic technician at Robins Airforce Base, he went back to school and in 2010 graduated from Macon State College with a Bachelor’s of Science in Education (Early Childhood and Special Education). He will graduate from Columbus State University in December (2018) with a Master’s in Educational Leadership.

He is married to Mrs. Sharon Wheeless who teaches Reading at Upson-Lee Middle School. They have been married for 8 years and have two children: Kensley (6), a 1st grade student at Upson-Lee Primary School and Colton (3). Mr. Wheeless enjoys spending time with his family, Friday nights under the lights of a football field, watching college football, Christmas, and going to the beach.